Lets start a bit earlier before when we land in Paris… We?? Ya. We were 7. Five of us colleagues, wife of one of my colleagues and their kid, Avanti. She alone will invite a special mention. See pic below.. 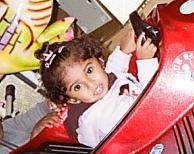 Lets start from Namma Bengalooru…. 🙂 Our flight was at about 2 am here …. A 10 hr flight… But due to the 4.5 hrs that france is behind us, we would land at about 7 am there… It was funny. We could never classify what to call our meals in the flight. We had a breakfast, n then some snacks n then it was time to have breakfast again…. Just before we landed. A Boeing 777 with 2 GE90 – 115B engines. The biggest engine today. It took us safely till paris… Fortunately, it was a direct flight and so we had no headaches of luggage transfers etc..

7 am in paris we land… But wait… What do I see before I land? A big looking airport… The size is something I could not come to terms with quickly.. Just to be clear, after we landed, the plane travelled about 10 mts plus left n right to find the right parking lot… N at last, we were let off.. N what do we look for first???? Where do we get our luggage? U know why???? There was much valuable stuff in that…. What??? Our great Indian food stuff.. Lots of maggi noodles, some rice, some rava, some spices of course and then some nice “Puliyodharai mix” & “Vatthal Kozhambu” (Nice spicy stuff to mix with rice n have…). We knew we could not survive without these in Paris, being a pure vegetarian.

But at paris Charles De Gaulle Airport, luggage is not available so soon.. We realise that is going to be long before we get it n leave the airport. Firstly, we have our immigration formalities. We get to a queue after a lot of searching and asking. There were fortunately a few young french people who spoke “a little” english to help guide us. We knew a bit too…. Merci, Au revoir, Ca va? Tres Bien n so on… small snippets which we once in a while use.. Most commonly of course was Merci (Thank u). After a few questions, we were stamped in to paris n let to go collect the luggage.

Now. Where is the luggage? They say ” Go, board that train n then you would get it” . What? A train? Within an Airport? yeah… We were dumb enough to ask “Which station should we get down at?” And an airport staff there said with a wry smile “There’s only one.”. 😉 We felt so Stupid… But we had to ask. How would we know?

The train runs within the airport and we saw many many planes on both sides before we got there… Anyone in bangalore knows how many buses u find at Majestic bus stand. You find more planes in this airport.. There are a total of 7 terminals 1 & 2A to 2F. And each can house about 80-90 planes I guess. And terminal 1 even more I guess..

When we get to the other side, there r sign boards. Thats one good point. You hardly need to ask anyone where to find things. There r umpty number of boards “Sortie..” (for exit) and thankfully Bagages is close to baggage. We find them. In good shape. Nothing spilt. Nothing broken fortunately. Just a little bit of a leak of oil from my “Vatthal kozhambu” into the ziploc cover from the plastic bottle. Not serious… N dont mind. No one troubled us for having oil in the check in baggage. Its fine as long as it is bottled, sealed n put in a ziploc cover..

We come out n then look for a Taxi… We find many out there. One guy is ok to take us 4 ppl. four? We thought three and a kid. He says no. its 4. Not 3… We say “ok baba. rehne do..” (to ourselves of course..) 3 of my colleagues were on way to Tulouse (in south of france). Just four of us to be in paris… We tell him Place d’italie.. He fortunately spoke some english. So, fine. There we go…

It cost us 65 Euro for the taxi for a distance of about 45-50 kms I guess… With a little looking, found our Hotel Citadines… Got in, paid up an advance n checked in…. I took a high floor facing the street…. Room 621… Or rather Apartment 621… See pictures below… (I shot pics before I would get the rooms looking less cleaner…. 😉 )

In the room. At last. Time to rest…. Took a short nap ..zzzzzzzzzzzzzz…………